Posted at 3:40 PM in News by Scarecrow

For Apiculture NZ’s Bee Aware Month, we wanted to pay tribute to one of our favourite insects. Bees are a keystone of the ecosystems we live in and depend on, and play a fundamental role in pollinating many of our foods.

Bees are a family of flying insects that live in a variety of habitats in Aotearoa and across most regions of the world. They have hairy bodies with small waists, and are vegetarian: they eat pollen and nectar. They can be amazing builders and organisers. But of the 25,000 types of bee around the globe, only a handful of species make honey. And they’re not all stripy yellow and black: among our native species in New Zealand, we have orange and greenish bees, but most kinds are all black.

New Zealand’s horticultural sector, a major sector of our economy, relies on bees to pollinate fruit trees and vegetable crops. Both native and introduced bees also work to pollinate flowering native plants like mānuka and kānuka. 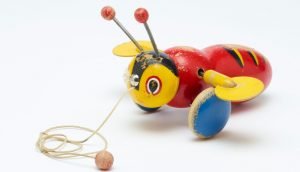 Aotearoa is home to 28 native bee species (not including this model). Photo: firstlighttravel.com

Aotearoa is home to 28 native species of bees. About a dozen other species were introduced by European colonists.

Most native NZ bee species live a solitary lifestyle, not in organised social structures. Instead of building intricate hives, they create individual nests in undisturbed soil or sand in what look like small mounds, or inside hollow plant material. Aotearoa’s largest native bee is black or orange and fluffy. Most native species are smaller than honeybees and tend to be black, but some have yellow or greenish colour.

European settlers introduced honeybees as well as their cousins, bumblebees, to Aotearoa in the 19th century. We have honeybees to thank for making the delicious, sweet sticky food we enjoy on toast, in cooking or baking, and in all kinds of drinks and potions. They also make beeswax, with which they build their magnificent hexagonal combs to house their hive and store their honey. 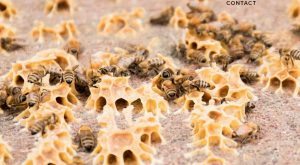 Honeybees are essential workers, not only in the agriculture sector where they pollinate our fruit crops, but in wild spaces too. They are the world’s most important species of pollinator in natural ecosystems and a key contributor to natural ecosystem functions. Their dominant role in pollinating many plant species, even in habitats where they aren’t native, means honeybees have a major impact on the ecosystems they buzz around, a role that scientists are still learning about. 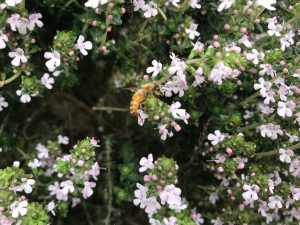 Native bees also play a vital role in pollinating native trees and bushes. Researchers have warned of the spike in numbers of managed hives around New Zealand, concerned that while honeybees compete on available food sources with native species, they can’t fully replace the role of our wild bees in pollinating native flora. Honeybees sometimes prefer to focus on introduced plants as opposed to those that native bee populations pollinate. This can create gaps in pollination, especially in areas where honeybees have out-competed native bees, which are more sensitive to intensifying agricultural practices.

Bee colony collapse is a global problem, with native and introduced species under threat in most of the world. Extinction rates have accelerated to 1,000 times higher than normal due to human activities like urban encroachment into diverse ecosystems, intensive agricultural practices like monocrops and pesticides, and climate change. But bee and other pollinator extinction threatens both the survival of our food system, and the survival of countless non-crop flowering plants.

The apiculture (beekeeping) industry is flourishing in New Zealand, even if our wild bees are under increasing threat from parasitic mites. We can all take small actions to support our local native bees and other pollinators: instead of mowing the lawn every week, enrich your garden’s biodiversity with a range of native species that flower in different seasons (avoiding pesticides and other toxic chemicals). Help your local pollinator community stay hydrated with a bee drinking fountain: leave a bowl of water in your garden. Buying raw organic honey from small producers also helps support positive apiculture that sustains our native bush and the rich ecosystems surrounding it.

Honey in history and today

From ancient Egypt to Sumeria, India, and Spain, for about 8,000 years people have been harvesting honey from hardworking bees. Just like today, honey was traditionally consumed as food, as well as used as a healing salve or medicine and as currency. Alongside honey, people soon figured out how to transform beeswax into candles and balms.

Honey is still a first-rate healing device: medical authorities around the world recommend it as a soothing remedy for colds and flus. Scientists have studied its inhibitory effects on various bacteria, fungi, and viruses, including in clinical trials that compare its performance with modern drugs. Its efficacy against coughs and cuts partly due to the presence of hydrogen peroxide in honey, generated from naturally-present enzymes as a preservative.

Given its many uses and benefits, honey and bees hold a special place in many cultures and religions. In Islam, the Prophet Mohammed recommends it as a healing food, with a whole chapter of the Qur’an dedicated to bees. The Buddha is said to have received a gift of honeycomb from a monkey during a period of retreat into the wilderness; similarly, the New Testament tells of John the Baptist’s period in the wilderness of Judaea, where he lived on wild honey and locusts (a sustainable and nourishing protein source!). In Judaism, honey is eaten with apples at this time of year (September-October) to help usher in a sweet new year. 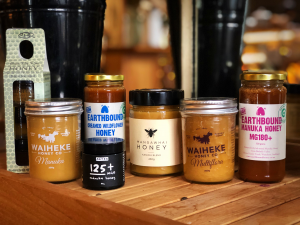 Some of the local artisan honey available at Scarecrow

At Scarecrow, we love honey, especially the raw, untreated organic kind made through respectful, sustainable practices, by passionate people that look after ao tūroa. We work with small-scale beekeepers, or apiarists, who harvest honey from native bush on Waiheke Island, on the coast up at Mangawhai, and in Waitakere Ranges. Producers like Church Bay Road and Aotea, who make a range of health products. Earthbound Honey batch produces not only a range of delicious natural honeys and personal care products, but natural beeswax moulds which attract particles in the air, acting as a natural purifier. Our friends at Waiheke Honey Co also supply Scarecrow with a healing lip balm; one of our favourite honey bee byproducts.

Louis Smith’s bee hives are dotted through manuka forests in Mangawhai Bay, where his grandfather bought a block of land in 1947. He “loves working with his bees, which give him the freedom to visit a hive, and head out on his surf board in the bay.” For Louis, apiculture makes a positive impact on the world, on people’s health and the environment. 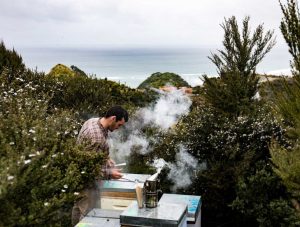 Working with bees has made Louis “increasingly conscious of the seasons as they fluctuate. While some good wet winters and dry springs are perfect for Manuka flowering, other years can bring inadequate water or be too windy or too cold” for the delicate ecosystem to flourish.

As an apiarist, Louis also has to be sensitive to diseases that can affect his beehives. While some diseases can be manageable if caught early, they can be missed by an inattentive or hobby beekeeper in the area. They can then easily spread between hives as bees travel over several kilometres when gathering nectar. A diseased hive can cause all its bee colony to die. “Another issue is the amount of available food resource,” says Louis. “A beekeeper can ‘rent’ a manuka plantation from a farmer, but with other bee hives located on the perimeters,” there can be competition on the food. This is especially risky for native bee species that don’t live in hives but survive on native trees.

Find out more by clicking here.

Gabrielle is a Paris-based consultant and researcher in energy, environment, agriculture and food systems.